In June, Q-Fin installed the first three SER600 machines at customers. They had already been sold before the company in Bergeijk had built them. A sign that there is a great need for this deburring machine that can grind a Radius 2 in one pass on sheet metal parts up to 600 mm wide. This was already evident at the end of last year when Q-Fin announced the launch of this machine in the form of a large number of reactions.

“The market is really waiting for it”, we hear from Product Manager Joost Kouwenbergh of Q-Fin. “Especially the steel processors with thicker laser, plasma and oxyfuel cut products that need to be galvanized and/or powder coated. They are increasingly confronted with R=2 rounding standard, for example in constructions for the government, but also in the petrochemical industry. With the SER600 we are responding to this. We did not modify an existing machine, but developed and built this machine solely to be able to get a Radius 2 on steel. Less is also possible, a R=1 or R=1,5 is in many cases sufficient, but R=2 now also can be achieved.”

“A Radius 2 means optimal edging coverage”, explains service engineer Erik Cox. “The rounding is such that a layer of lacquer or zinc on the corners is just as adhesive as elsewhere on the product. This prevents oxidation. Corrosion always means extra maintenance costs. And it can also be dangerous because it can affect the stability of a product. Just think of bridge parts that are not in sight. If corrosion can occur there for an unseen length of time, it can eventually weaken the bridge.”

Q-Fin is not the only one in the market who claims an R=2. Yet this machine is unique, says Erik. “The crux is the combination of 2 different brushing techniques. This allows it to reach R=2 in one passage at 1 meter per minute. Other machines can’t do that. That makes a big difference in production speed, while the quality is constant.”

High emergency’ with prototype compensated
Jos van den Besselaar Constructie in Udenhout, Van der Sluis Technische Bedrijven in Genemuiden and Staalservice Zuidbroek in Zuidbroek are the first companies which have purchased an SER600. “One of these customers even had such a ‘high need’,” says Joost, “that we have already completed a large series of products with our prototype machine in Bergeijk for them. In this way, we were able to help the customer move forward without already having the machine in place. Normally at Q-Fin we deliver the machines with 2-3 weeks delivery time, but the first three still had to be built, while the demand was already there. So that took a little longer in this case. In the meantime, we have the following three machines under construction, for which there is already a great deal of interest.”

Operators can easily set up their own machine
Erik is responsible for the installation of the SER600, often together with a wet-acting extractor and associated piping. “Including a training for the operators, this will take about a day,” he says. “The installation is similar to that of other Q-Fin machines, only the SER600 has five instead of three machining stations. This makes the machine a lot longer and the explanation takes a little more time. What is the same is its simplicity and ease of use. Operators can work with it immediately after training and can also set up and adjust the machine themselves. They don’t have to wait for a workshop manager or foreman to arrive or something like that. They also get the instructions as a manual and we watch when they finish their first products. We really help the operators on their way.” At Q-Fin, they have service for the customer, who they prefer to call ‘partner’. The installation therefore includes aftercare. “We always come by after a few weeks, or earlier if desired, to answer questions, to do things, to help a new operator move forward, whatever is needed. And in between, you can always call. That’s what we’re for,” says Erik. “Customers are always welcome to join the QKC (Q-Fin Knowledge Club) every Wednesday afternoon in Bergeijk”, adds Joost. There they can ask questions and they can also bring their own products to finish on our machines. It doesn’t matter which machine they have and whether it’s just two weeks old or two years old. Just give us a call and we’ll take care of it.”

Why not earlier?
The best part of the installation work comes at the end, says Erik. “These are the reactions of the operators when they see the results. They really appreciate the clean, consistent quality, even at the smallest recesses, and the great speed. Especially when they come out of a manual situation, that’s a world of difference. On average, our machines then go four or five times faster. And don’t forget other aspects. Working with a handheld machine, for example, puts a lot of dust, noise and vibrations on your hands, so that’s another area where the operators benefit enormously. It is also difficult to find people who are willing to do this work. The most frequently heard comment is: “Why haven’t we bought such a machine before?”

Joost nods: “ You get immediately used to the quality and speed. Then you can’t go back. It’s like switching to a faster computer. After an hour you are so used to it that the old situation in which you might have been for years is no longer conceivable. Customers don’t want without the machines anymore.”

The reactions during the installation of the first SER600 machines were also extremely positive, says Joost. At a customer he even saves 4 men. They are now doing the same deburring work with 1 man instead of 5. “We expect the same tenor from the next customers who have already registered”. 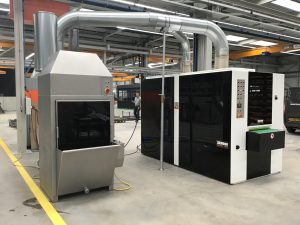 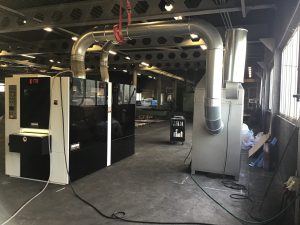 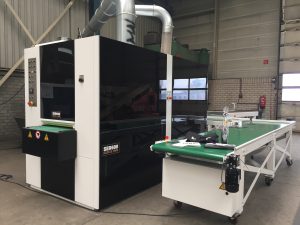 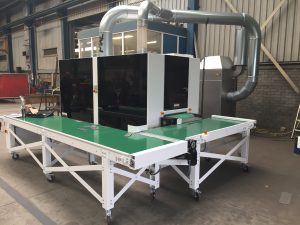